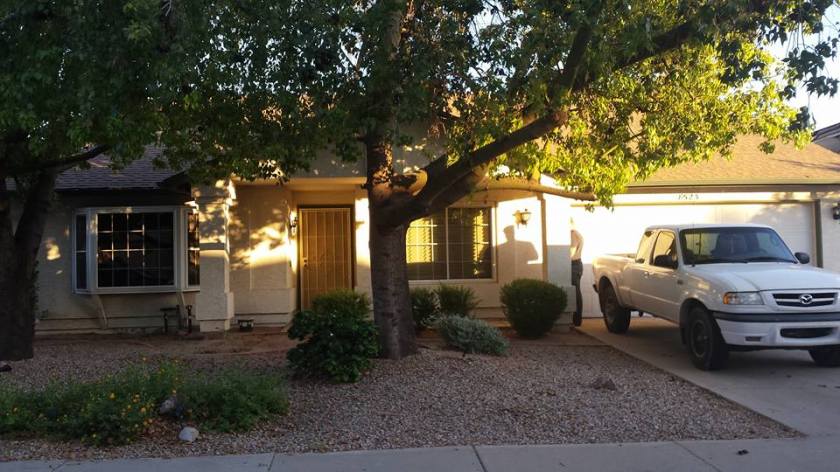 On October 24, I woke up to a phone call from my husband. He very calmly explained that he needed me to pick him up and take him to urgent care because he’d been in a car accident on his way to work…at 4:30AM. He’d been trying to reach me ever since then but, since my phone goes on Do Not Disturb mode from 7PM to 6AM, I’d missed his first thirty-eight calls. He assured me that he wasn’t severely injured, just had bad whiplash and wanted to have his shoulder and neck examined.

So I drove out to pick him up at the Whataburger across the street where the accident had occurred. The driver who had hit him ran the red light, smashing into his truck at the driver’s side tire. My husband was fairly certain his truck, a Mazda with over three hundred thousand miles on it, was totaled. As I drove him to urgent care, we fell silent. That truck had been given to him as a gift from his aunt right around the same time we started dating. There were a lot of memories associated with it (I called it Bruce, he called it Betsy). Of course, we were thankful he and the other driver were okay, but it was sad and kind of surreal to realize that we’d never drive that truck again.

The PA at urgent care took an x-ray of my husband’s shoulder and said everything looked normal. She suggested rest and Ibuprofen to help with the inflammation. We spent the rest of the day processing everything that had happened, trying to plan our next steps. My husband was sure he’d be able to borrow a work truck until we could find a replacement vehicle. Once the officer who was present filed his report, which had witness accounts stating the other driver was at fault, we would be receiving a call from their insurance and hopefully a check.

Or so we assumed.

Well, the other driver called their insurance and said my husband was at fault. Which prompted a call from our insurance. My husband hadn’t thought to get the names and phone numbers of the witnesses since it had all been included in the police report, but now he was being asked to contact those witnesses and have them call our insurance so they could corroborate his story. The officer’s report, my husband found out, hadn’t been filed yet and probably wouldn’t be for another week or two. As you can probably imagine, we were feeling really discouraged at this point. After venting a little to my mother-in-law about the situation, she suggested we contact an accident attorney or personal injury lawyer. So we did.

Updated 11/16: Two and a half weeks later, agents from both insurance companies have assessed the damage done to Bruce/Betsy and confirmed it as totaled. The police report has been filed. Now, we’re just waiting for the other driver’s insurance to accept liability and contact us with a) Bruce/Betsy’s estimated worth and b) a check to cover “pain and suffering.” My husband’s work needed their truck back so he’s driving a rental, the cost of which falls under “pain and suffering” as well as the physical therapy he’s been doing for his neck (a problem with his alignment was discovered upon a second visit to the doctor).

My husband’s been on the look out for a new truck but it’s dangerous to get our hearts set on anything when we don’t have a price range, or even a guarantee that we’ll get enough for a down payment. (We have some money saved up but not nearly enough.) At the beginning of this adventure, I started off with an almost zen-like peace, confident that God knew our plight and was actively working for our good. I still believe He’s working, but I’m struggling to hang onto that peace, especially because all we can do right now is wait.

It’s kind of funny. Around this time last year, we were dealing with my husband’s torn meniscus. I’ll be wary next year when fall rolls around. (Just kidding, but not really.) Oh, life is challenging, isn’t it? Challenging and unpredictable and wonderful all at once. This being the month of thanks, I’m trying to focus on all the good things we have. Like a roof over our heads, clothes on our backs, food in our fridge, jobs, relatively good health, and one working car. That’s more than a lot of people can say. I have to remember that.

We’re really looking forward to Thanksgiving, when we get to see both my husband’s extended family and mine. My parents and siblings will be staying at my house for the whole weekend. It’ll be a tight squeeze and there will be a mess to clean up once Monday rolls around, but I know it’ll be a lot of fun. Things always seem a little brighter when family comes to visit.

If I don’t post anything else this month, happy Thanksgiving everyone!